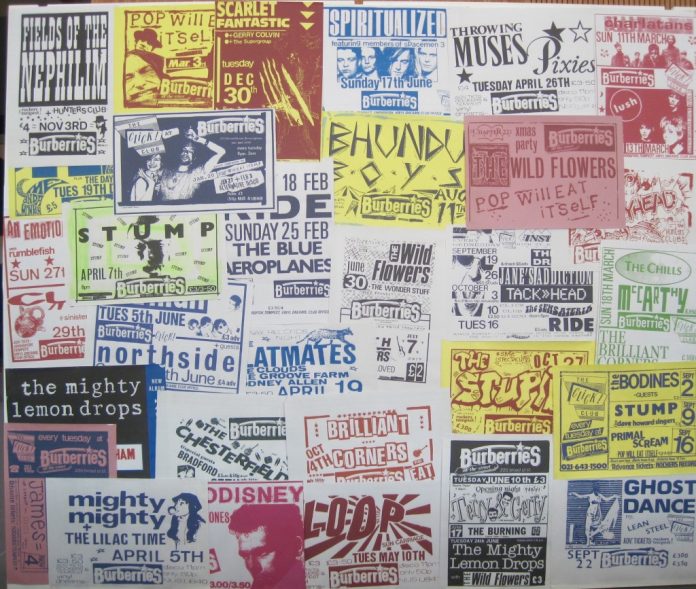 In the late 1980s, the Click Club on Broad Street was a focal point for Birmingham’s alternative culture, and a crucial stopping-off point for bands on nationwide tours. On the 30th anniversary of the club’s birth, John Kennedy visits an exhibition rounding up those heady days.

This long-overdue nostalgic love letter to the halcyon days of cut-’n-paste analogue gigs at the Click Club at Burburries on Broad Street pays due homage to the undisputed impresario/promoter of alt indie pop Mr David Travis and co-founder Steve Coxon. In collaboration with principal curator and director of the Birmingham Centre for Media and Cultural Research Paul Long and his formidable team, the exhibition celebrates a fascinating montage of reproduction posters in garish primary colours – “Two thirds the quality/half the price!” There’s a sturdy old-fashioned museum glass case stuffed with Travis memorabilia, numerous original photographs and reminiscences and a series of contact prints. Contact whats? Dave Travis estimates to have an archive of some 100,000 negatives.

An accompanying A5 booklet recapturing the pioneering age of pre-DTP (bedroom cut ’n paste, wrist-wrenching typewriters and liquid Typex sniffing) is a comprehensive précis of the time, the place, the bands and – not least – the howling anecdotes. Also note the photograph proving how unwise it was to leave Pop Will Eat Itself alone with a moveable-type information board – crayon-in-fist literacy and grebo a dangerous combination.

From the emerging baggy scene to indie, from grebo to Terry & Gerry’s skiffle punk, there was a constant full-on flux capacity of disparate genres, with some still plying their trade today. It was the time of the NME/Sounds hegemony and Neil Taylor’s legendary C86 tape mix. Look out for a pre-icicle pixie Bjork, and The Wonder Stuff, Miles Hunt in all his glorious dripping curls. The enigmatic, tragic, fiberglass-bonced Frank Sidebottom, and a certainly-no-more-than-12-years-old-looking Edwyn Collins. Ocean Colour Scene supporting Ride, trailing songs from that “troubled” first album.

The title is taken from Click Club headliner darlings Mighty Mighty’s 1986 eponymous single. There are opportunities for punters to share memories and anecdotes, and appreciate schematic maps of venues and notable bands and artists. The panoramic print spread of Broad Street pre-Symphony Hall/ICC will have some of the younger ones asking where the horse and carts are. The days when a drowned victim dragged from the Gas Street Basin wasn’t buried but was recycled for ingested lead and mercury.

Get your hands on one of those booklets and treasure. The organisers are keen for attendees to share their own memories and feedback, either at the exhibition or by contacting them via [email protected]

Is There Anyone Out There? is at the Parkside Gallery until May 28. For more information, visit http://www.bcu.ac.uk/news-events/calendar/anyone-there.